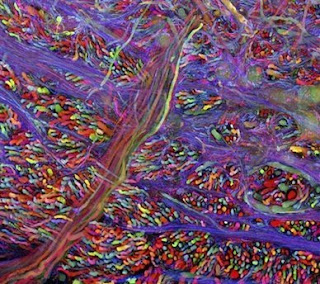 Three U.S.-based scientists won a Nobel Prize on Wednesday for turning a glowing green protein from jellyfish into a revolutionary way to watch the tiniest details of life within cells and living creatures.

Osamu Shimomura, a Japanese citizen who works in the United States, and Americans Martin Chalfie and Roger Tsien shared the chemistry prize for discovering and developing green fluorescent protein, or GFP.

When exposed to ultraviolet light, the protein glows green. It can act as a marker on otherwise invisible proteins within cells to trace them as they go about their business. It can tag individual cells in tissue. And it can show when and where particular genes turn on and off.

Researchers worldwide now use GFP to track development of brain cells, the growth of tumors and the spread of cancer cells. It has let them study nerve cell damage from Alzheimer’s disease and see how insulin-producing beta cells arise in the pancreas of a growing embryo, for example. Read More…