Some pictures of the 54-gallon 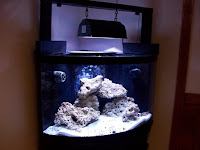 As promised, I finally got the camera working. Now I just need to work on my picture taking skills.

As you will notice, the rock is basically void of all coralline algae. This is an unfortunate side effect of “cooking” the live rock. This was done to eradicate some problematic algae on the rock. For those that aren’t familiar with the term “cooking,” it actually has nothing to do with using an oven or even cooking.

Cooking in aquarium hobby terms means keeping rock in the dark to kill off nuisance algae. Most people will put their rock into a plastic trash can, like a Rubbermaid Tote container. Using a powerhead for movement and a heater to maintain a stable temperature, the rock should be kept in the dark for a few months. Water changes should be performed during this period to keep the water nitrate- and phosphate-free. The end result: rock free of unwanted algae, but also void of coralline algae. 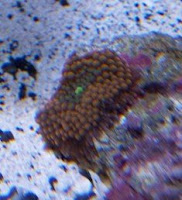 As I mentioned in my post earlier this week, I added two “trial” corals to the tank last week. Both are doing well and I am getting excited about stocking the tank. I am, however, trying to remain patient … not one of my strong suits. I’ve included a picture in this post of the orange ricordea. Presently the lights only run a few hours each day, but as I start acquiring more corals, I will begin increasing the lighting duration. 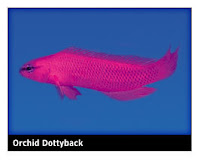 I’ve also come to a decision on which fish I’ll be introducing next week. I am going to add a pair of black percula clownfish and one of my all-time favorite fish, the Orchid Dottyback. All three will be tank-raised species bred at ORA (the photo I’ve included is from ORA’s website). In nearly every tank I’ve setup, I‘ve had an Orchid Dottyback. Their color and personality make them a great addition to almost any tank and, unlike many other dottybacks, they are not overly aggressive.

Now that I have the camera working, I will post more photos next week once the new additions are happily swimming around in their new home.