A volcanic eruption close to the South Pacific nation of Tonga has destroyed rich birdlife and vegetation, leaving a wasteland of black ash and tree stumps, witnesses said Friday.

Sightseers, officials and scientists who have taken boats to the site have described frequent explosions hurtling rocks and ash hundreds of metres into the air. 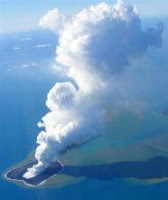 It continued to spew Friday even as a major earthquake with a magnitude of 7.9 rocked Tonga’s main island of Tongatapu.

The volcano is hundreds of kilometres from the epicentre of the earthquake, which caused no significant damage but sparked a regional tsunami warning.

Radio journalist George Lavaka, who visited the island with a sightseeing group Thursday, said the explosions were accompanied by a deep rumbling.

“The island itself is totally destroyed,” Lavaka said, “there is no living thing left there, it’s all covered in black ash.

“There are only black stumps where the coconut trees were,” he added. “We saw dead birds and fish in the water.”

Tonga’s chief geologist Kelepi Mafi, who inspected the area Thursday, said the volcano has two vents, one on Hunga Ha’apai and another around 100 metres offshore.

The volume of the rock and ash coming from the vents has completely filled the gap between the offshore vent and Hunga Ha’apai, increasing the island’s land mass by hundreds of square metres.

Lavaka’s boat managed to get out of harm’s way when the explosive power of the eruptions suddenly surged.

“We were close to the island and there was huge explosion and the smoke was coming toward us, and people were yelling “start the boat, start the boat,” he said.

“The smoke stopped about 30 metres short of the boat, we were a bit shaken actually.”

Soon after the boat moved further away from the island, the area they had been in was enveloped in poisonous smoke.

A local airline was reportedly planning to fly sightseers near the eruption site Friday.

Mafi said the government was warning the curious to stay away.

“It’s very interesting, but it’s very risky also,” he said, adding that — given the strength of the explosions — the eruption could continue until the end of the weekend.

The eruption is not expected to affect residents on Tongatapu.

Residents at Tongatapu’s western end reported seeing the orange glow of the eruption Thursday night, with bright white sparks flying in the air.

Friday’s quake, which struck shortly after dawn, was centred 210 kilometres south-southeast of Nuku’alofa, the US Geological Survey said.