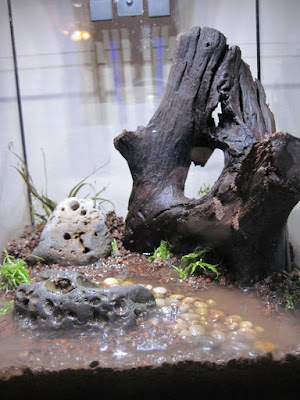 A week passed after filling my Ecoxotic EcoPico with reverse osmosis water and the tank was still cloudy. I was seriously regretting not rinsing the Seachem Flourite before putting the substrate inside my little tank.

My boss hooked me up with some plants and rocks he’d received from members of SCAPE (Southern California Aquatic Plant Enthusiasts), so I headed home for an exciting evening of aquascaping.

Unfortunately, I was met with immediate difficulty.

Using a long pair of tweezers with an angled tip, I meticulously inserted plant roots into the substrate with the dexterity of a surgeon. Yet, no matter how careful I was, I couldn’t help disturbing the substrate. So much so that I could no longer see what I was doing. With plenty of RO water on standby, I decided to siphon out the the murky water so I could see what I was doing. I had no idea at the time if this was a wise maneuver, but I was determined to wake up tomorrow to a beautiful planted tank.

Now with the water essentially drained, I poked a few API Root Tabs into the Flourite. Although not initially a part of the plan—a colleague had given me them after I’d already filled the tank up—I seized the opportunity to fertilize the substrate. I pushed the tablets into the soil equal distance apart, basically everywhere but underneath the driftwood.

Root Tabs are sold in blister packs, the pre-formed plastic packaging typically found in over-the-counter pharmaceuticals. The package stated the tabs contain essential nutrients for “vibrant growth,” strong roots and hardy leaves and recommends adding new tablets each month for optimum growth. Sounded good to me, although I figured I’d see how the first month went before adding more.

With the substrate now supercharged, I pressed two medium size gray rocks into the dirt. The craters carved into their surfaces gave them both character. I carefully poured some smaller rocks into the shape of a trail using a paper plate folded in half. Since my fingers are fat and clumsy, I used long angled tweezers to plant my greenery. Planting without water in the tank was easy—I just stuck the greens into the substrate and gave them a little twist.

With the plants now planted, it was time to refill the tank. I set a bucket of RO water on top of my entertainment center and siphoned water down to a water bottle inside the aquarium. I really wanted to prevent another dust storm, so I’d poked a hole inside a water bottle so that the water would enter the tank very slowly. I also had a back-up plan if the water remained cloudy: Kent Marine ProClear Freshwater Clarifier.

I planned to add fish to the aquarium in a couple of weeks, so I began shopping around for a heater.

I’d been pining after the Hagen Fluval E-Series, a feature-rich line of heaters with all the bells and whistles. Of course, space inside the EcoPico is limited, not to mention the fact that the space age looking Fluval E-Series would stick out like a sore thumb in the natural aquascape I was trying to create. Small heaters, I discovered, are pretty hard to come by. I eventually settled on a 50-Watt Hydor Theo heater that ended up fitting perfectly in the tank.

Whether your tank is fresh or saltwater, there is one item that is indispensable: an algae magnet. I wanted something small I could keep inside the aquarium at all times, like I did with my saltwater tank. Based on favorable word-of-mouth here in the office, I chose the Two Little Fishies NanoMag.

When I first opened the NanoMag, I’ll admit, I was disappointed. The wet side is essentially a piece of foam with Velcro attached. It’s only with repeat use can you appreciate how truly awesome the NanoMag is. The magnets are powerful, it easily scrubs away hard-to-reach muck plus it doesn’t obstruct the view inside the tank from my favorite spot on the couch. I definitely recommend the NanoMag for small tanks. I can wedge this thing into tight spots next to the driftwood I wouldn’t otherwise be able to reach. I wished I had one of these back when I had my reef going.

In my next post, we’ll check my plant growth and go shopping for fish.

Read more about my EcoPico: